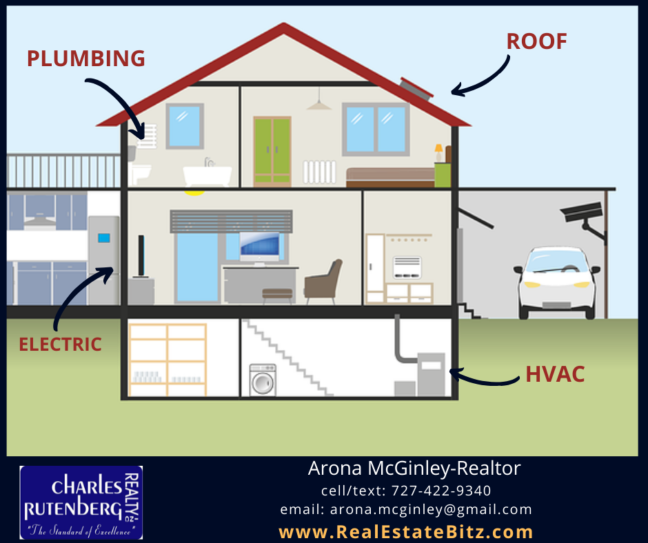 Your offer has been accepted to purchase your dream home, and now you have to set up an inspection to make sure the home is in good condition.

Any of the above can impact the value of your home. If a home inspection is not done, and later you find out that the foundation is cracked or the roof is rotted, this can be a costly fix for the buyer.

Once something is revealed in the home inspection you can negotiate with the seller for a lower asking price.

Who can do a 4-Point Home Inspection?

**A Home Owner cannot do a Home Inspection

Buying a home can be the most exciting time for you and your family. But don’t lose out on the home of your dreams by doing this alone. This is one of the biggest financial transactions of your life, and I want to help you by making this experience less stressful.

As you go through the process you may have questions on –

There are so many things to think about when buying your home. Don’t go through this alone. Call/Text 727-422-9340 I can help you buy the dream home for you and your family. 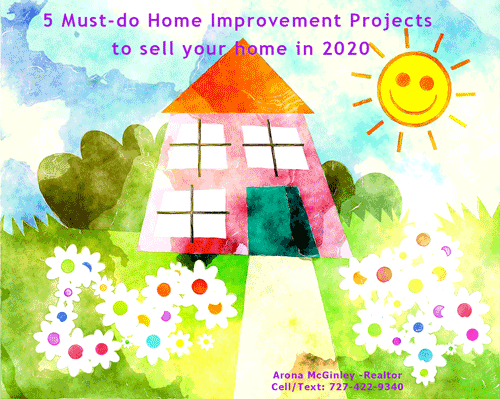 You’re ready to sell your home, and although you’ve always kept your home in great condition you still need to do some extra maintenance. When selling your home your property has to be in tiptop shape if you’re going to get top dollar when you sell. If you’re selling your home you still want to have your home looking good on the inside as well as the outside. Even if your home is on the market for 3 months or more, you have to keep giving that home your love, even if you have already vacated the home. When your home looks like its well cared for, you get more people interested in looking at it and even get top dollar. Here are some tips that you may already be doing or neglecting.

Get your punch list made up, and make sure you’ve got all of these little things taken care of. By doing these small things you can get more return on your investment.

In order to use an FHA loan to purchase a home, the property will have to be appraised and inspected by a HUD-approved appraiser. This is to ensure that the property meets HUDS’s minimum property standards.

WHAT IS AN APPRAISAL?

Things You Should Know About FHA Home Appraisals

These are just some of the things that will be addressed with an FHA Appraiser. To get more information visit FHA APPRAISAL

If you are looking for more information on selling or buying a home please call/text 727-422-9340 or email: arona.mcginley@gmail.com or fill out the contact form.

Are you a first time home buyer?

When you are ready to buy your home a lender will basically evaluate your overall financial picture as well as other financial factors to see if you qualify for a mortgage. Here are some tips to help you get your loan. 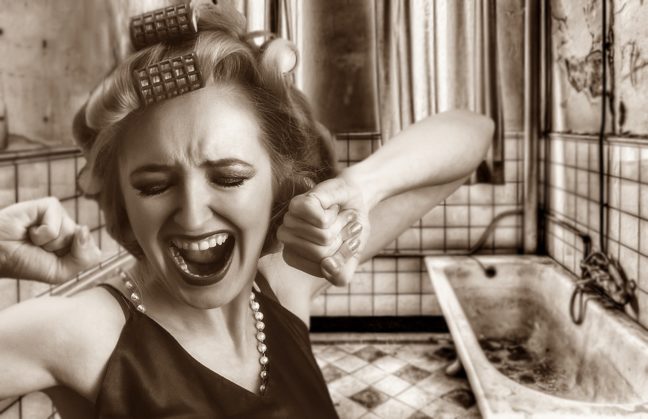 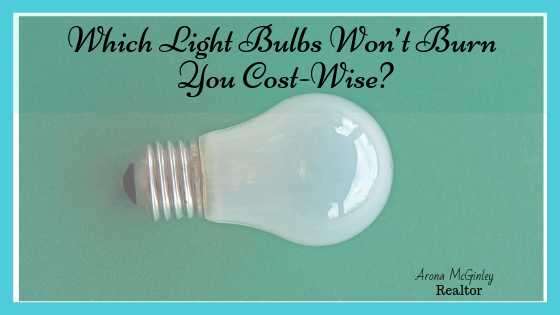 Although the old-fashioned incandescent bulb is on its way out, you have more lighting choices than ever before. And that means making decisions about price and energy efficiency. But don’t forget aesthetics.

If you wind up with lighting that’s harsh, flat, or unpleasant — like when you’re trying on bathing suits in a retail dressing room — it won’t matter that you got that LED on sale or that it lasts forever. You’ll wish it didn’t.

For most home lighting, your choice boils down to three options, from most to least expensive:

Energy-efficient light bulbs are just one way to take back your energy bills.

So how do you choose?

Since January 1, 2012, the Federal Trade Commission has required a new “Lighting Facts” label. It was designed to help consumers break the habit of picking bulbs based on wattage to determine brightness. Now a metric called lumens is used for this task. Wattage only measures the amount of power a light bulb consumes.

Confused? Here’s an example: If you want to replace a 100-watt incandescent with an LED bulb and get the same brightness as the old bulb, you’d need a 27-watt LED bulb with an output of 1,600 lumens.

How to Read the New Label

While the new light bulb lingo sounds pretty complicated, it’s not once you get the gist. Here’s a breakdown of the “Lighting Facts” label:

Brightness: Here’s a quick tip: the brighter the light bulb, the higher the number. Standard bulbs range from 250 to 2,600 lumens.

Estimated Yearly Energy Cost: How does this add up? According to the U.S. Department of Energy, by upgrading 15 traditional incandescents in your home with energy-saving bulbs, you can save about $50 per year on your energy bill. Plus, energy-efficient bulbs produce about 75% less heat, so you may see additional savings when it comes to home cooling.

Life: The life of each bulb is estimated based on the usage described. Keep in mind that labels marked Energy Star meet strict energy efficiency guidelines set by the U.S. Environmental Protection Agency:
Energy Star LEDs use about 25% of the energy and can last about 25 times longer than traditional incandescents.

Energy Star CFLs use about 25% of the energy and last 10 times longer than a comparable traditional incandescent.

Light Appearance: Terms such as “soft white” don’t mean the same thing from brand to brand. To compare bulbs, you need to know their color temperature, which is measured in kelvins on a scale of 1,000 (the warmest — think candlelight) to 10,000 (the coolest — like a blue sky). LEDs, CFLs, and halogen incandescents all come in a wide range of color temperatures.

Energy Used: As we mentioned above, wattage now only measures energy usage, not brightness. So the lower the wattage, the less energy used.

Contains Mercury: Have no fear; only CFLs have a small amount of mercury, so you won’t see this if you are purchasing LEDs or energy-efficient (halogen) incandescents.

What’s Not on the Label?

Not all specs are covered on the FTC label.  So we suggest searching for bulbs online if you’re seeking something really specific. You can often find the necessary info on manufacturers’ websites. Stuff you can look for includes:

How well the bulb shows off colors and textures. This is the key to whether you’ll be satisfied with the quality of light you get. Look for the color rendering index (CRI), a measurement of 1 to 100. The higher the bulb’s score, the better.

Incandescent halogen bulbs score a perfect 100. CFLs and LEDs don’t fare as well as a group, although some individual bulbs get high scores.

How the bulb casts off its light (in technical terms, beam spread). Let’s say you use track lighting to highlight a piece of artwork. “If you want to light a 15-inch-by-9-inch picture on the wall, you don’t need a 4-foot-by-4-foot spread of light,” Witte says. “To be energy-efficient, match the beam spread with the task, putting light only where you need it.”

Buying the Best Bulb for the Job

The key to setting the mood is combining different sources to create pleasing layers of light, says lighting designer Rosemarie Allaire. So here are a few more features to keep in mind that will help simplify the bulb selection process.

Halogen incandescent: They give off the same quality of light as the old bulbs, but save 25% on energy costs. They do cost more than the originals, but less than LEDs or CFLs. Plus, “Incandescent light renders color and texture beautifully,” Allaire says.

LED: “LEDs don’t have the three-dimensional light quality that incandescents do, and I find them to be flat,” Allaire says. “They’re all over the map as far as color rendering goes, and they don’t dim well, so I don’t use them in living areas or for art lighting. But their long life is a big plus.” Tip: LEDs will continue to improve rapidly as technology advances. But for now, be sure to check the label for color rendering and color temperature before you buy.

CFLs: CFL lighting is diffuse, so its color rendering generally isn’t up to snuff compared with incandescents. But if you find a particular brand with a color temperature you like, CFLs can work nicely in drop-bowl fixtures and table lamps — places where air circulates freely around the bulb. CFLs don’t do well with too much heat buildup. 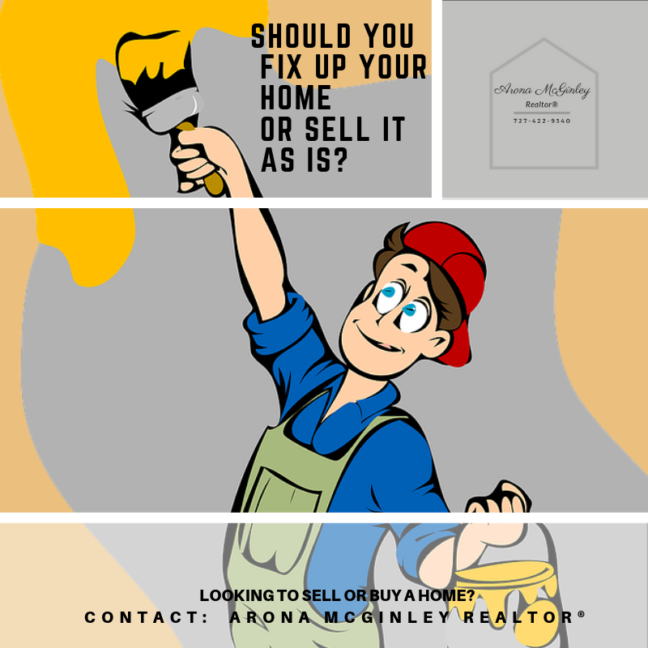 So you’re thinking of selling your home, but the bathrooms look a bit worn and there are other areas like appliances that should be replaced. The biggest question is, should you spend the time and money to update the interior and exterior of your home? Or should you just sell the home as it is?

Many homeowners go overboard and spend too much time and money improving and fixing up their home before putting it on the market. It’s a good idea that if you know that you will be selling your home that you talk to a real estate agent. A realtor can tell you exactly what home improvements will give you the best return on your investment. Why spend time and money on home improvements that most buyers will never notice or will not give you the best return on your investment.

A Realtor has access to information about all homes for sale. We can do comparables and show homeowners exactly what their return can be for each home improvement project. Even if you plan on selling in December and it’s only January, get with a Realtor. This will save you time, and lots of money on home repairs that you shouldn’t do. Realtors will make sure that you make improvements to your home which will return the investment with a good profit. We can also give you advice about what colors most buyers are looking for in a home. So don’t hesitate to talk to a Realtor today.

Hi! I'm Arona, a Realtor in Tampa Bay Florida. I am passionate about real estate, tech-savvy and committed to excellence. My goal is to make the process of selling or buying a home a good experience and stress free. I am available to my clients 100% of the time. I love working with new homeowners and also homeowners that are now looking to downsize and is starting a new chapter in their life. I would love to find you your new home! Whether it's moving into a bigger home or downsizing to a smaller residence. I am here to help! So please call me with questions for real estate or information about different communities in the Tampa Bay area. I am always happy to help!

Connect With Me On: 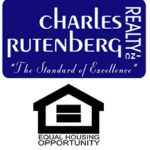 Search For A Home in Pinellas, Pasco and Hillsborough County 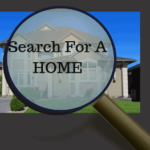 Arona McGinley is a Realtor in Pinellas County Fl. Arona started off her career in the Technology and Marketing field, but since then have worked in Home Improvement but always harbored a love for Real Estate. She also enjoys drawing and painting in acrylics. When Arona is not selling homes she spends her time with her kids in beautiful Seminole, Florida.